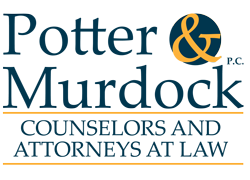 Voters in 7 States Approve Recreational or Medical Marijuana Use—Is This the Tipping Point for Legalization? 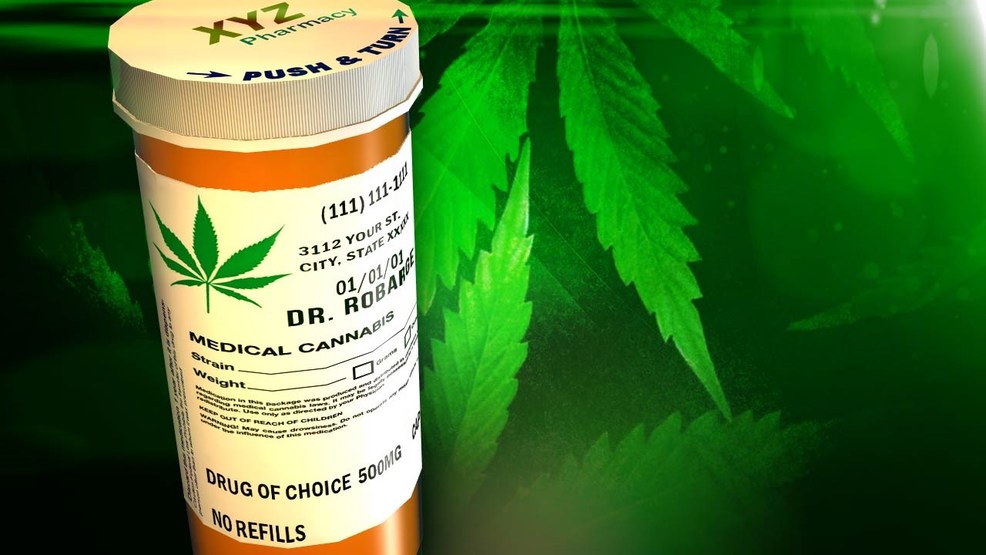 Even though Colorado and Washington voters led the way with the passage of initiatives in November 2012 that legalized the recreational use of marijuana, legalization of marijuana for recreational purposes in California, a state with the economy of a large industrial country, is a game changer. With legalization in California and other key states, the federal government faces growing pressure to change its stance on marijuana as an illegal drug for which there is no accepted medical use and a high potential for abuse (as defined by the Food & Drug Administration). Under federal law, marijuana is classified as a Schedule I substance, the same as drugs such as heroin and LSD.

In August of 2016, the DEA responded to a petition to remove marijuana from Schedule I. In its response to the petition, the agency stated that there is no accepted medical use for marijuana because “the drug’s chemistry is not known and reproducible; there are no adequate safety studies; there are no adequate and well-controlled studies proving efficacy; the drug is not accepted by qualified experts; and the scientific evidence is not widely available. There is no consensus among qualified experts that marijuana is safe and effective for use in treating a specific, recognized disorder. At this time, the known risks of marijuana use have not been shown to be outweighed by specific benefits in well-controlled clinical trials that scientifically
evaluate safety and efficacy.”

Voters in California passed an initiative that will legalize the recreational use of marijuana for adults over the age of 21. The initiative passed[1] by a 56-44 margin.

California has a long history of voting on marijuana reform. The state passed[2]the country’s first medical marijuana law in 1996. The latest measure, Proposition 64, the Adult Use of Marijuana Act (AUMA),[3]legalizes:
-the possession of 1 ounce of marijuana flower, or up to 8 grams of cannabis

-concentrates for age 21 and older

-cultivation of up to 6 plants

-taxed and regulated system for a recreational marijuana industry

-Restrictions on marketing to minors, localized tax rates, and restrictions on commercial marijuana operators determined on a county / municipal level.

-systems for reducing sentences and expunging past marijuana convictions

Implications for the Workplace in California

Proposition 64 allows employers to have drug-free workplace policies that prohibit marijuana use by employees. It also allows federally contracted employers to continue complying with federal drug testing requirements without fear of violating state or federal law. However, the California Constitution protects an employee’s right to privacy and drug testing may not be allowed except for employees in safety sensitive positions.

-possession of 1 ounce of marijuana,

-includes a clause that allows anyone who does not live within 25 miles of a marijuana store to grow up to 6 marijuana plants.

Implications for the Workplace in Nevada

Employers may continue to enact and enforce policies that restrict drug use, including marijuana. And this includes drug testing.

Voters in Maine passed[6] an initiative (Question 1) that legalizes the recreational use of marijuana for adults over the age of 21. The initiative passed by a 50.15-49.85 margin. Under the law, Maine’s Department of Agriculture, Conservation and Forestry is responsible for regulating and controlling the cultivation, manufacture, distribution and sale of marijuana in the state

-the possession of up to 2 1/2 ounces of marijuana,

Implications for the Workplace in Maine

The amendment for MRSA §2454(3) adds: “A school, employer or landlord may not refuse to enroll or employ or lease to or otherwise penalize a person 21 years of age or older solely for that person’s consuming marijuana outside
of the school’s, employer’s or landlord’s property.”

This amendment may restrict pre-employment drug testing for marijuana. The law specifically allows employers to have workplace policies that restrict employee marijuana use.

The Legalization and Regulation of Marijuana Act (Proposition 205) initiative would have legalized:

-the possession of up to 1 ounce of marijuana,

-adults over 21 would have been able to grow up 6 marijuana plants in an enclosed, locked space within their homes and possess the marijuana produced by those plants in the location where it was grown,

-A limit of the total marijuana plants grown in a single residence would have been limited at 12,

-possession up to 1 ounce of marijuana outside of an individual’s residence,

-possession of up to 10 ounces of marijuana in an enclosed, locked space within their residences,

Implications for the Workplace in Massachusetts

The law does not mention drug testing, but it does state that it does not affect employer’s authority to enact workplace policies.

Voters in Florida passed[9] an initiative (Amendment 2) that legalizes the medical use of marijuana. The initiative passed by a 71-29 margin. Previously, a medical marijuana initiative in Florida had been defeated by a 2% margin in 2014.

-the medical use of marijuana for individuals with debilitating medical conditions as determined by a licensed Florida physician,

-allows caregivers to assist patients’ medical use of marijuana,

-Department of Health shall register and regulate centers that produce and distribute marijuana for medical purposes and shall issue identification cards to patients and caregivers.

Implications for the Workplace in Florida

Amendment 2 restricts on-site marijuana use at work, and it is unclear how this law will affect drug testing programs.

Arkansas had two competing proposals: The Arkansas Medical Cannabis Act (Issue 7) and the Arkansas Medical Marijuana Amendment (Issue 6). Issue 7 was struck from the ballot on October 27th, 2016 by the Arkansas Supreme Court due to invalid signatures. Voters in Arkansas passed Initiative 6, legalizing the medical use of marijuana. Issue 6 passed by a 53-37 margin. Issue 6 makes repeal of the law impossible as it is a state constitutional amendment. It legalizes medical cannabis under guidance of a physician. The program under the control of Arkansas Alcoholic Beverage Control and a new medical marijuana commission.

Implications for the Workplace in Arkansas

Issue 6 states “An employer shall not discriminate against an individual in hiring, termination, or any term or condition of employment, or otherwise penalize an individual, based upon the individual’s past or present status as
a qualifying patient or designated caregiver” (Sec. 3). This provision will likely create require employers to be able to demonstrate an employee is impaired before terminating or disciplining an employee for testing positive for marijuana.

Voters in Montana passed[10] an initiative (I-182) that further reduced restrictions on the medical use of marijuana. The initiative passed by a 58-42 margin.

Montana reinstated its medical marijuana laws through I-182. The initiative allows patients to access and use marijuana for several debilitating illnesses. Medical marijuana was originally made legal in 2004 in the state. However, legislative restrictions made implementation of the law a challenge.

The new measure (I-182) repealed former measure SB 423’s requirements that medical marijuana providers have no more than three patients and the state review physicians who prescribe marijuana to more than 25 patients per year.

Implications for the Workplace in Montana

The existing medical marijuana law in Montana does not prohibit workplace drug testing and the newly approved initiative does not change existing law in this regard.

A measure in North Dakota (Measure 5) legalized the limited use of medical marijuana. It passed[11] by a 64-36 margin.

The initiative made it legal for North Dakota residents who suffer from one of several debilitating illnesses to use marijuana with a doctor’s permission. They can possess up to 3 ounces of marijuana for medical purposes from either a state-licensed dispensary or a personally grown supply.

Implications for the Workplace in North Dakota

The new law does not mention the workplace or drug testing.

LEGALIZATION OF MARIJUANA AS OF NOVEMBER 12, 2016

*Note: This map does not include states that have allowed limited medical use of CBD oil or states that have decriminalized marijuana. There are variations in the states marked as illegal in the map above. 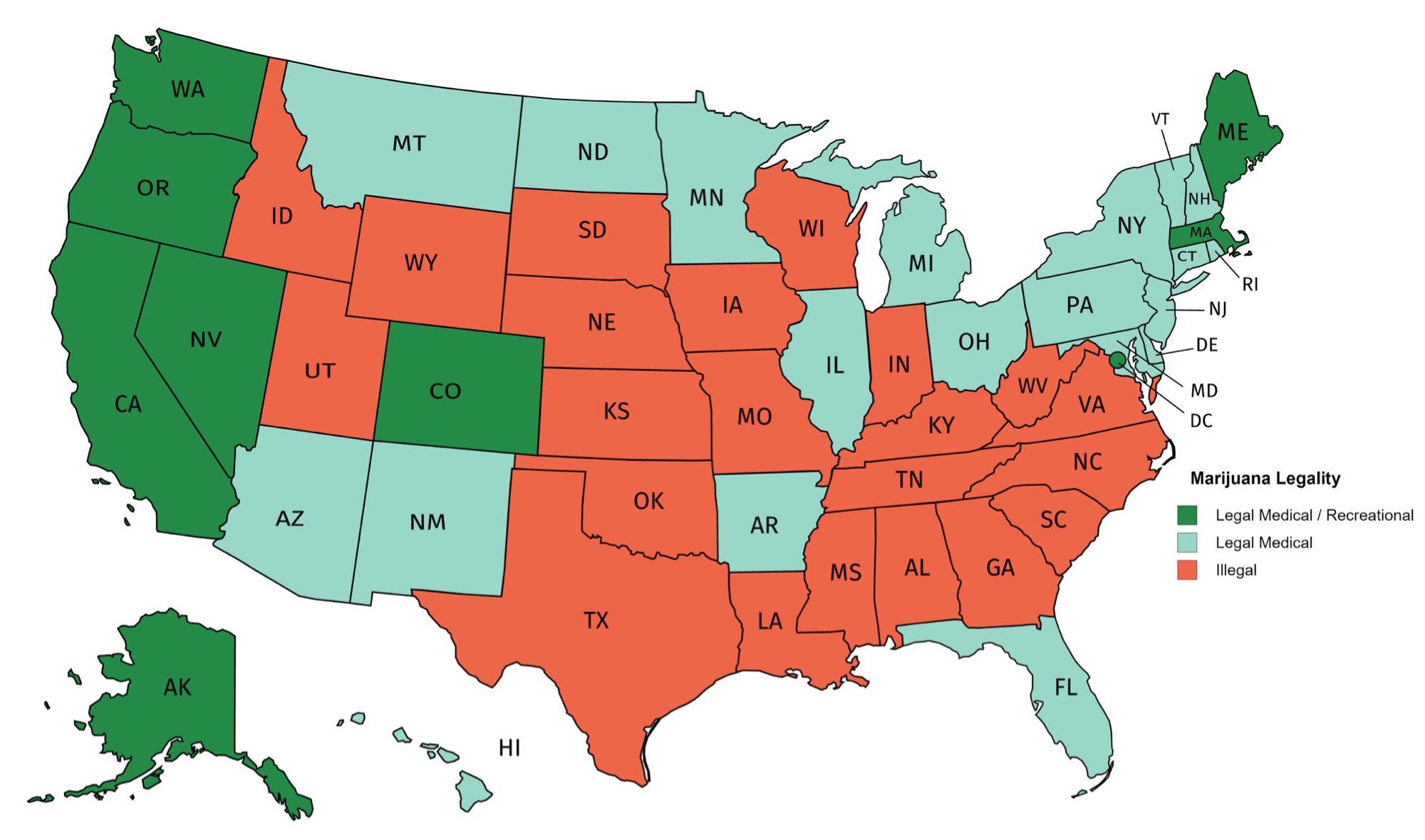 As this map demonstrates, more than half the states in this country allow individuals to use marijuana for recreational and/or medicinal purposes. Unlike Department of Transportation and the Department of Defense regulations which call for zero tolerance of marijuana use, the trend is for state laws to require an employer to show that an employee was “impaired” by marijuana before taking an adverse employment action.

Historically, employers have been able to rely upon marijuana’s designation as a Schedule I illegal drug to justify discipline of employees under workplace drug testing programs and courts consistently have sided with employers
in challenges to termination decisions based on positive tests for marijuana. However, it is unlikely that this trend will continue.

This is an ideal time for employers to reexamine their substance abuse policies to ensure the policies conform to state law. The number of employees who are using marijuana in conformance with state law will continue to grow. Employers should decide how to address this trend. There are several factors to consider, including: is the workforce covered by Department of Transportation regulations, which trump state law? Are employees in safety sensitive positions? What is the effect of the legalization on the employer’s ability to hire and retain qualified employees? Does the employer’s substance abuse policy address the serious implications of prescription drug or opiate abuse?